Local theatre companies and audiences will be quite familiar with Christine, particularly those in Wangaratta. Whether in her capacity as an actor or director she has been delighting audiences with her particular flair for bringing out the best in the script and the actors involved. Christine’s current project is directing the musical Annie and its cast of adults, several children and one, very real, dog. Christine has taken the time to answer a few questions about the rewards and challenges of directing such a well known musical.

What are you talking to DIY itchy kitschy about today?
Directing the musical Annie for a community theatre group.

Have you directed before?
I’ve directed all sorts of things-the first time when I was only eight I directed a performance of a Mickey Mouse Club song which I also choreographed! I’ve directed a heap of things for my school students but also corporate fundraisers, musicals and various comedy events. I’ve even directed infantry platoon assaults for the army! Before ANNIE my last show was Cabaret-a totally different genre. 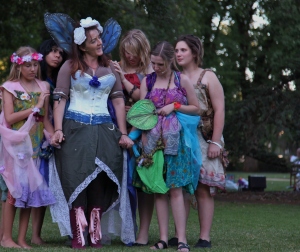 How did you get involved with the musical Annie?
I felt like directing again after being on stage for a while-I find I get sort of stage crazed and think I know how things should be done and then I know it’s time to have another go on the tight rope again. So I pulled together some proposals for some shows that a) I wanted and could see myself directing and b) I thought I could sell to the local theatre companies and make them want to stage them. I was also touting Jesus Christ Superstar and Chicago…..

Do you prefer acting or directing?
Both, when I’m acting I eventually do enough that I say “right Christine either shut up and stop trying to hint to people about what they could do, or else just find another show to direct” I’ve only ever acted and directed the same show once – NEVER AGAIN. I need another pair of eyes to direct me when I’m acting, and you can’t honestly direct yourself. You don’t know whether you are being inventive and courageous or just looking completely ridiculous on stage. You need someone who can see the whole thing. When you are a director your whole life runs second to the show-it’s all life engulfing, which is fine but after the show you need a good deal of quiet time away from being everyone’s keeper – going back to the theatre but as an actor provides that time – and it also makes you a more empathetic actor.

What has been the biggest challenge when directing Annie?
Always the biggest challenge is getting everyone together at the same time to rehearse-it’s rare you get it and you are always chasing people. No matter what the show people will always have the rest of their life to deal with and you just have to work around that, cheerfully and with a lot of understanding and strength. People will always have to work, tend to children, and deal with things like Fathers Day and Easter holidays. As a director you have to be organised where your cast isn’t, creative and adaptive with the rehearsal schedule.

What has been the highlight?
There are lots-learning how to work with a dog trainer and our Emmy who plays Sandy, I’ve learnt heaps about how they work. Also working with the children-the youngest is seven and finding all different ways to get them to be creative and finding ways to explain stage concepts to them has been fun. Seeing people get into costume and find their character. The best thing is when someone comes to you and says “Hey I’ve just been thinking of that scene and thought I could do this – what do you think” I love encouraging the creativity in people in theatre!
What is the most exciting thing you have learned?
A while ago things were getting tricky in another show I was directing and a friend sent me a quote from Shakespeare In Love:

HENSLOWE Mr. Fennyman, let me explain about the theatre business. (they stop) The natural condition is one of insurmountable obstacles on the road to imminent disaster.
FENNYMAN So what do we do?
HENSLOWE Nothing. Strangely enough , it all turns out well.

This encapsulates a lesson I learnt recently – that is that sometimes things do get to a stage where a director just has to do what they can and then let it go, it looks like you’re on the road to ruin and dark corners-however, often a problem can fix itself, someone else can step in or you can use the time to think of another way around it – but if you just pause it usually turns out well, and strangely enough – the few times I’ve tried it, each and every time, whatever it is has magically found its own solution.

Oh and I also – largely through necessity, have now learnt to how to operate, program and design my own lighting…..and last week the kids showed me I hadn’t forgotten how to do a fantastic cartwheel.

Where can people go for more information?
They can go online to book a ticket at www.wangarattapac.com.au or the Wangaratta Players Facebook page where you can join a theatre group or learn more about the shows we do.

Would you direct a musical again? If so which one appeals to you the most?
I’d love to Jesus Christ Superstar in Wangaratta – I’ve had an offer from a great rock band if I do and I’ve designed a exciting new concept for it-top secret ‘til I stage it. I’d also love to have a go at My Fair Lady

– love Bernard Shaw – but perhaps in a few years though – it has been recently done. But if someone came up with something I hadn’t done and asked me to direct, I don’t think I could say no. I’m in love with the idea of doing something new, different and challenging.

Want to be interviewed as part of this project? Fill out the form below.

Sherlock and the Case of the Upset Fandom with Megan of Oh No! Lit Class!

What we do in the Shadows with Meg from Indoorswomen

The Keepsake, Mary Shelley and Eboli